On Friday 7th July a Bristol Scout biplane will return to the Bristol flying sheds at Larkhill for the first time in 103 years.

The prototype Bristol Scout was test flown at Larkhill in February and March 1914 by test pilot Frank Busteed, and no Bristol Scout has been there since. The sheds, now Grade II listed buildings erected by The British & Colonial Aeroplane Company in 1910 are believed to be the oldest aircraft hangars in Europe.

The Scout Type C, serial no. 1264, has been rebuilt from three original parts kept as souvenirs by the man who flew that aircraft in 1915, Flt Sub Lt Francis Donald H Bremner. It is now the only airworthy Bristol Scout in the world. 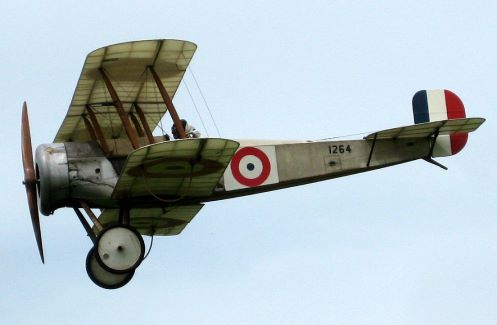 The event is being organised by the Wings Over Stonehenge group. This is a small group of volunteer amateur historians and early aviation enthusiasts who have made a detailed study of flying over the Stonehenge World Heritage Site from 1910-1921; and aims to educate, entertain and inform people of that early aviation heritage.

It has long been an ambition of Wings Over Stonehenge to organise an event such as this.

The Bristol Scout will be on static display outside the sheds, and hopefully, its engine will be run. If we can get the bnecessary safety clearance this will be the first rotary aero engine to be heard from Larkhill for many, many years.

In addition to the aircraft spectators will be allowed access inside the historic sheds, these are still in use by Larkhill Garrison today (today they are used to store furniture) so this is a rare opportunity.

The sheds will be used as an ideal venue for two illustrated presentations. Timothy Brown, author of the book ‘Flying With the Larks’, will give a short talk on the Bristol Aeroplane Company at Larkhill from 1910-1914, followed by the aircraft's builders and pilots, David Bremner (F D H's grandson) and Theo Willford, who will discuss the Scout development and flying characteristics.

The following links tell you everything you need to know:
Event Information
Finding us
The Story of the Bristol Scout
Harry Busteed’s Story
The Bristol Scout Webpage
Flying with the Larks Facebook Page
Regional News, General, Social Media