“ALL HANDS ON DECK, MAYDAY, MAYDAY, MAYDAY”, bellowed the Mate (John Johnston) of St Barbara V as he dashed below to alert the off-watch of a disastrous event occurring less than 300m from St Barbara.  He simultaneously notified the local maritime agencies via the VHF radio.

The crew from 29 Cdo Regt partaking in Leg 5 of Ex MEDITERRANEAN UBIQUE had been sailing St Barbara V (the Gunner Flagship) all day into a strong Easterly wind whilst on passage from La Gomera to Tenerife in the Canary Islands, on Thu 7 December 2017.  Upon rounding the southern end of Tenerife, the wind increased a further 10 knots to reach Force 7 and the sea state rose rapidly with it.  We had been watching with interest another yacht that had slowly been catching us for the previous 2 hours.  As the wind picked up we took a second reef in the mainsail and the chasing yacht overtook us at close quarters before also taking a reef.  As she came back onto the wind, I noticed her healing at an unusually high angle, she broached violently and her mast hit the water.  The crew tried hanging on to the rails but there was no way they could prevent themselves from falling into the water.  Within seconds the yacht had turned completely upside-down and it became very apparent that the reason for her capsize was the loss of her keel. 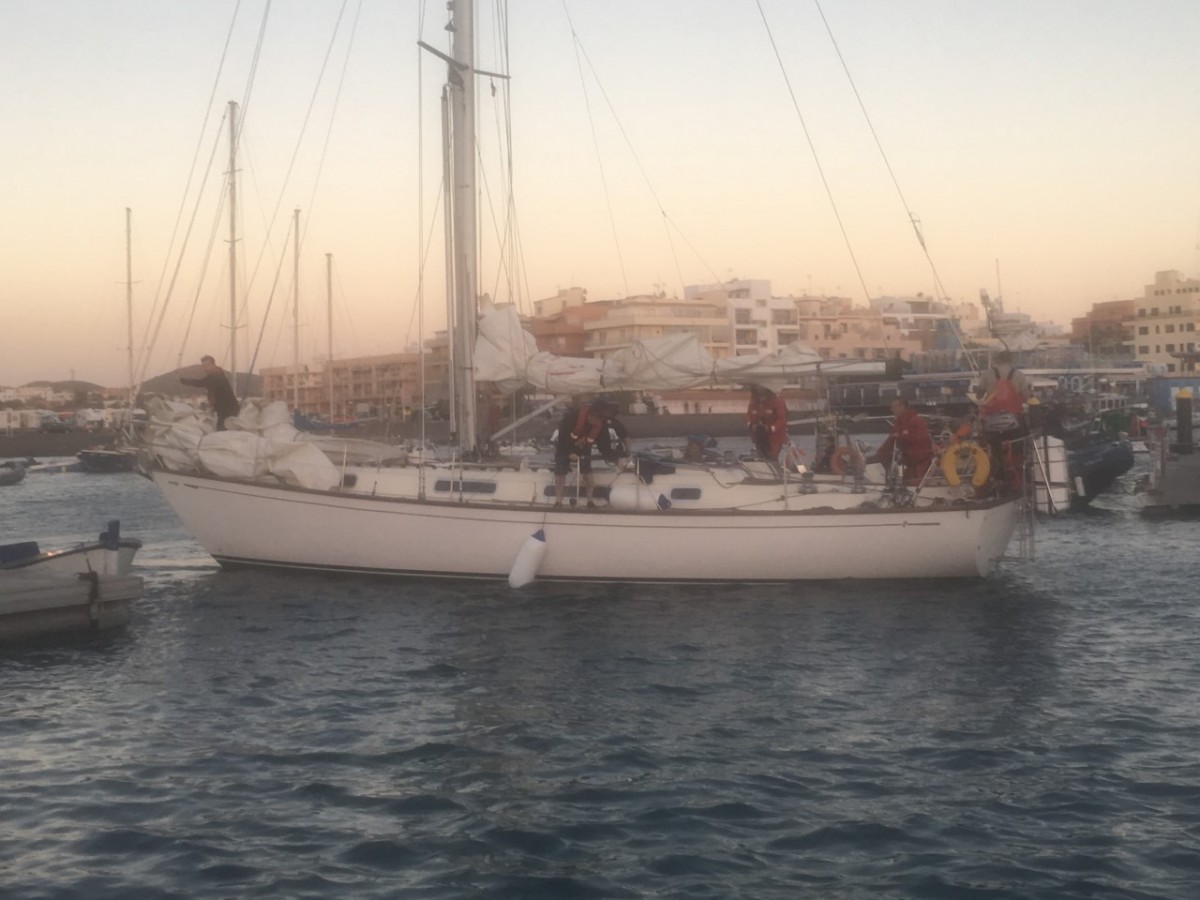 Fortunately, as skipper, I was also at the helm and watching intensely as the disaster unfolded.  I immediately alerted the Mate, started the engine and put the on-deck watch into action.  Under the guidance of their Watchleader (Capt James Lambden) and despite the testing conditions, they rapidly dropped the 2 headsails (yankee and staysail), lashing them to the foredeck and allowing me to turn St Barbara back to assist.

The stricken yacht had 5 German-Swiss crew on board, 4 of whom had floated clear but the 5th, the only female, was still attached by her harness inside the inverted yacht.  Her husband removed his life jacket, dived beneath and incredibly managed to release her.  They were fortunate to resurface within close proximity to their yacht's life buoy and the husband's life jacket which he put back on.

I had by now maneuvered St Barbara close to the other 3 crew members who had floated clear of their upturned hull.  My crew threw a throwing line and a fender on a long warp to secure them to St Barbara.  They all managed to grab hold of these lines and one by one they were brought on board, using the stern ladder and climbing over the push-pit with the aid of the Mate, Bdr Matthew Fisher and LBdr Luke Templeton.  This might sound relatively simple but it was far from it.  In order to keep St Barbara pointing head-to-wind, I needed to maintain a slight forward motion into the heavy sea.  This added to the difficulties the crew were having when trying to drag the heavy, soaked, fully clothed casualties, all still wearing a cumbersome life jacket, over our high stern rail.  It took the collective efforts of all 3 of them to achieve it but they did so remarkably quickly. 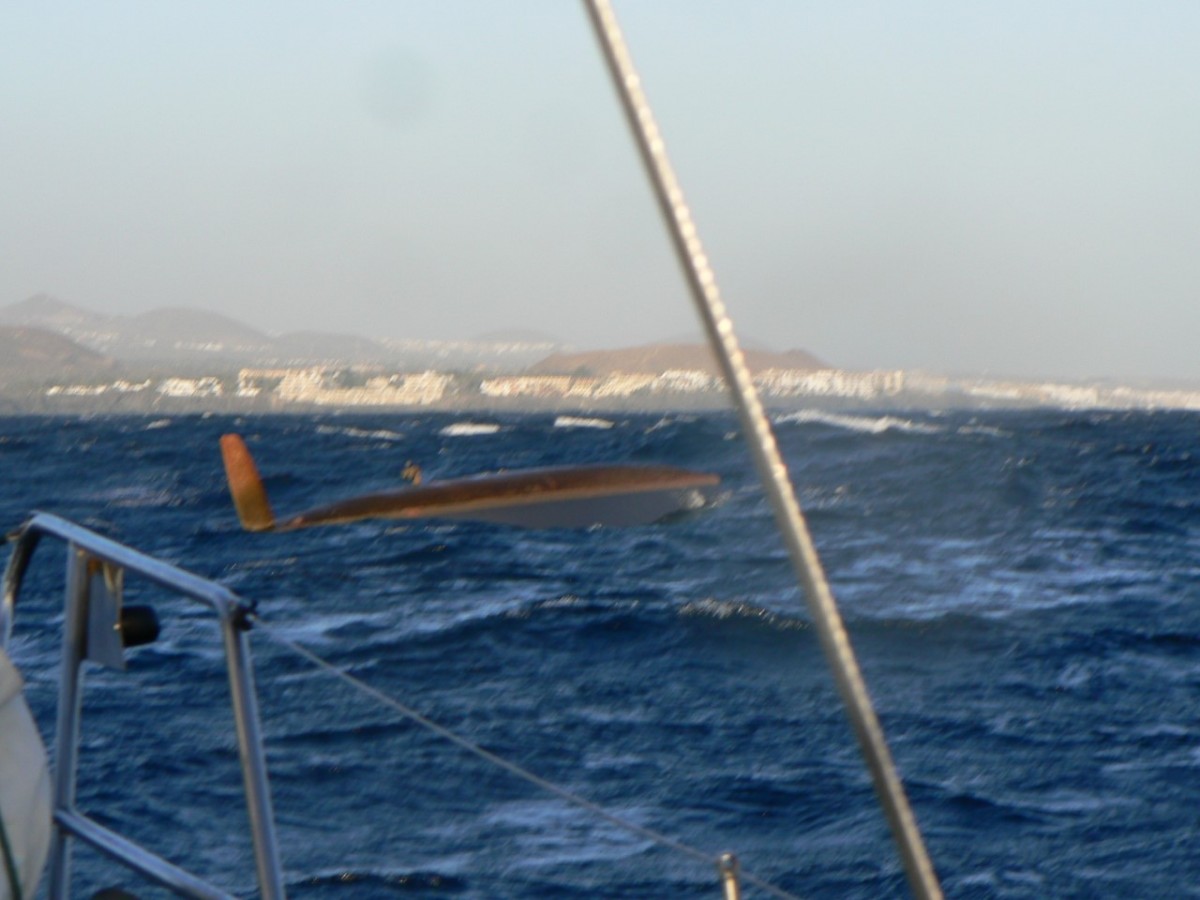 This allowed me turn St Barbara back to attempt to recover the remaining 2 casualties who had by now been in the water for over 20 minutes.  Luckily we managed to bring them alongside at the first attempt and recovered them in the same way.  All 5 crew were taken down below to be triaged by our Ship's medic (Sgt Pete Edwards) and provided with warm, dry clothing and reassurance by Sgt Paul Burnett and Capt Joshua Roughton.  Luckily none of them had suffered any physical injuries but the women was clearly, and unsurprisingly, suffering from shock.  As the air-sea rescue helicopter passed overhead, I took St Barbara to the nearest harbour of Les Galletas where the local maritime community were waiting to assist. Together we transferred the casualties ashore and passed them over to the harbour authorities who took good care of them.

The skipper called me the following day to report that they had all fully recovered and to say how grateful he was for their rescue.  It is without doubt that had we not been so close to have witnessed the disaster, and then recover the crew, that with a strong offshore wind and falling daylight, their chances of survival would have been minimal.  The yacht itself, Tyger of London, a Comet 45S, has since sunk.