The Royal Artillery Assembly 2019 was a resounding success.  Last weekend the Royal Regiment of Artillery hosted over 400 Gunners, both serving and retired, along with special guests to join them in Blackpool for the AGM.  A weekend of comradeship, entertainment and the Grand Gala Dinner on the Saturday night.

The Friday evening saw the National Executive Committee come together for dinner. The NEC took this opportunity to say thank you and farewell to the North West Regional Representative, Major Roger Downham and his wife, Jenny.  Roger has served on the NEC for a number of years and will be sadly missed.  The NEC presented Roger with a Certificate of Appreciation, signed by the Master Gunner,  for all his invaluable guidance and support to the Royal Artillery Association.

The Assembly began with a presentation from the Master Gunner, Lt Gen Sir Andrew Gregory KBE CB, who briefed the assembly on the Strategic Review currently being carried out across the Royal Regiment. The Regt Col, John Catto also talked about where the regiments stand on manning and our national footprint with a focus on the regiment’s achievements over the past year.

Lt Col David Penniall MBE BEM presented on the rebasing plan and current building within the Larkhill Garrison.  It is clear that Larkhill will become the new ‘Home of the Gunners’ and it was good to hear of the new buildings and accommodation that the single soldiers will have at their disposal.

We were also really pleased to welcome Alan Carr and Susan Osbourne from the War Horse Memorial Organisation.  Both Alan and Susan gave a very emotive and heart felt presentation on the Warhorse, which was very well received by our members.  Alan and Susan also joined us as special guests at the Gala Dinner on Saturday night.  We are privileged to have made this ongoing association with The Warhorse Memorial Organisation and hope to see them again at other RAA events. 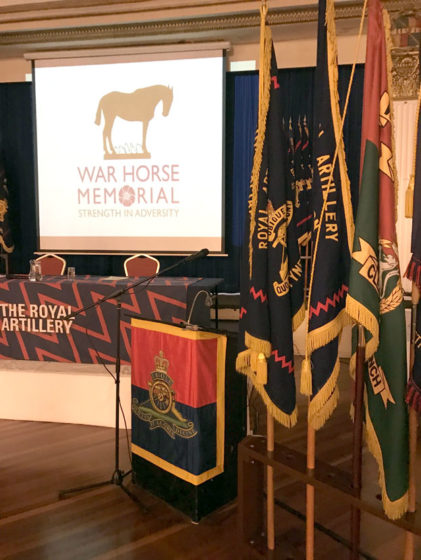 The annual awards were this year presented by the Master Gunner St James’s Park.  The awards are presented for outstanding service and support to the RA Charities. There were many proud winners and Artillery House would like to send its warmest congratulations to all recipients of awards, a full list of which will appear in July’s edition of The Gunner magazine.

The RAA AGM was chaired by Brig Mark Pountain CBE, ably assisted by the Regimental Secretary Col Matthew Carter, each of whom reflected how well the past year has gone and how busy the Association and Regiments have been.

The Standard Bearers Annual Competition was held on Saturday Afternoon in the Norcalympia. We were pleased to see so many entrants and proud to announce the winner, Mr Mark Elliot from the Kingdom of Fife Branch of the RAA. We would like to thank the RASM and his team for their ongoing support. It was also great to see so many branches supporting their entrants and we hope to see many of our standards at the NMA in July. 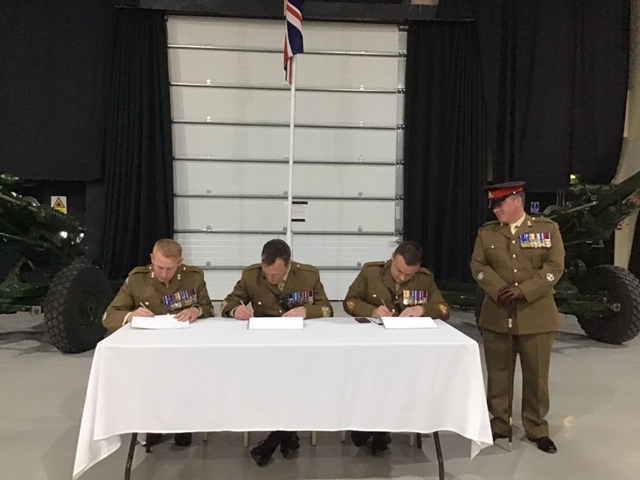 The Sunset Ceremony is always a splendid start to Saturday evening.  This year it was performed by the Lancashire Artillery Band, supported by their Pipes and Drums with some outstanding solo performances.  It is always a real crowd pleaser and with the Standards also on parade it is a proud moment for all.

I simply could not write this report without including a special "Thank You" to all those who helped in the organisation and running of this year’s Royal Artillery Assembly. Without some outside help our small team could not come close to putting on such a marvellous and worthwhile event. Most noticeable this year were 14 Regt RA and103 Regt RA which provided much appreciated support in terms of manpower, transport, equipment, displays and the band.

Also, a thank you to all those regiments who supported us by allowing their representatives to attend; we had over 200 serving soldiers this year and hope that this only grows over time.

I would like to add a special thank you to the RASM, WO1 Bryn Pugh and his team WO2 (RABSM) C Pritchard and WO2 Rylance for bringing all the military elements together so seamlessly - without their assistance we could not have achieved yet another high quality event. Thank you also to our small and dedicated team from the North West.

Finally, thank you to all the branches, regiments and wider gunner community who supported the assembly and to all the standard bearers who, once again, did us and themselves proud.